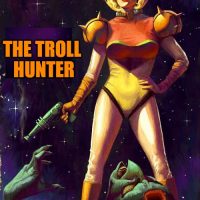 A Reddit user decided to paint his bedroom closet doors, probably to liven up the place to impress the ladies. But his goal wasn’t easy. He was going to recreate The Great Wave off Kanagawa, a famous Japanese wood block print (and quite possibly one of the most famous pieces of Japanese art in the world). No wonder it took him three whole months. Cleaning the two huge, dark brown closet doors off before starting to paint. DubwooferMusic After the background blue was painted on, he began […]

Plenty Of Artists Use Colored Pencils, But This Creator’s Approach Is Totally Unique

When it comes to medium of choice, plenty of artists will tell you that pencils — monochromatic or otherwise — are their favorites. The level of detail that you can achieve with these pointed beauties is top-notch, which is why artistic realists the world over swear by them. While most simply sharpen their tools of the trade and put them to paper, this creator takes a less conventional approach. Instead of using colored pencils to create art, Tuomas Markunpoika turns them into art. Vimeo / Tuomas Markunpoika […]

You’ve Seen Street Art Before But Definitely Not Like This. These Are Uniquely Adorable. 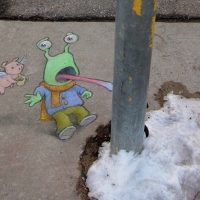 You Can Turn Your Instagram Photos Into T-Shirts By Using This App.

If you’re familiar with the mobile app Instagram, you know that many people dedicate a lot of time to their mobile photography. The precious moments people take a long time to perfectly capture in Instagram deserve more than just a few “likes.” That is where the creator of SnapShirt, Michael Krilivsky comes in. With this app, you can take your favorite photos and turn them into clothing! kickstarter It allows you to choose from a wide variety of types of clothing as well, from sweatshirts, to hoodies, to tank tops. […] 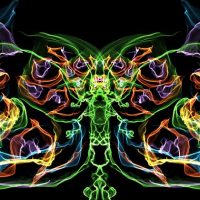 Growing up with two older brothers was hard enough, but having to deal with them being incredibly artistically inclined was arguably more frustrating. You see, I can’t draw a stick figure to save my life. Meanwhile, they were busting out beautiful self-portraits, complex abstract paintings, and striking still lifes like it was nothing. That’s why you can probably understand that any tool that makes me seem like a talented artist might appeal to me…enter Silk. The “interactive generative art” allows users to play with their cursor to […]

A Loving Dad Creates Adorable Doodles Around His Baby Boy. He Can Be Anything. 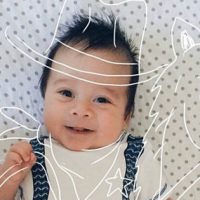 Every good parent believes their child has the potential to be anything they set their mind to as they grow up. Supporting their ideas while keeping them grounded in reality is a big part of preparing children for the real world. This dad took that idea to the next level with his son, even before the kiddo learned how to crawl. Baby Khoi’s doodle adventures, courtesy of his dad, are documented in all their adorable glory on his blog, “Khoi World.” 1.) Cowboy Tumblr 2.) Snorkler Tumblr 3.) […]

He’s Been Called The Da Vinci of Barista Coffee Art. You Need To See Why. 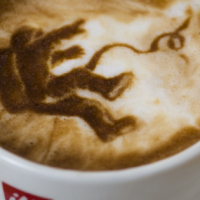 Coffee artist Michael Breach has been making a name for himself for the intricate designs in his lattes and for his quirky sense of humor on his Instagram. Breach began doing these pieces of latte art while working the night shift as a barista. Because he had so few customers he would pass the time getting insanely good at making faces and things out of coffee milk and cream. Breach estimates he’s done over 400 different customizable lattes, and even does portraits by request! Let’s get caffeinated, ya’ll! A scene […]

It’s Not Every Day That Handwriting Will Blow You Away. But This Guy’s 30 Examples Are Stunning. 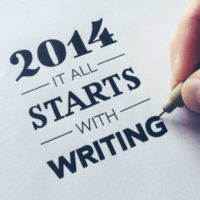 Sean McCabe has a true passion for hand lettering and typography, as well as a love for meticulous detail. Sean is a hand lettering artist and type designer from San Antonio who also does podcasts on creativity and business in the design industry. His passion for the craft has now turned into a full time job and he sells some of his work on his website. Sean’s hand lettering has gathered so much interest online that he even provides hand lettering classes now. Check out some of […]

This Looks Like A Supernova, But It’s Really Just Ink In Water — Incredible!

French independent filmmaker Thomas Vanz‘s short movie, “Novae,” features some seriously striking supernova imagery. A supernova is an event where a star explodes and dies, creating a massive explosion in space. This happens when a significant change occurs in a star’s core. While it’s not often that we are able to see them in our galaxy, you could swear that Vanz documented one himself or used computer-generated images in the film. However, all he needed to capture this stunning footage was an aquarium, ink, and water. Pretty […]