Hey, so remember that time “frothing bull” Ben Affleck made a ginormous jackass of himself on national TV during a debate on radical Islam? We sure as hell do.

Well, there’s at least one politician who’s willing to join arms with the likes of Piers Morgan and Rosie O’Donnell and commend Ben for his cringe-inducing performance:

@BenAffleck, bless you. Thank you. http://t.co/bPO2A2pHUV

Uh, Congressman? Were you watching the same show we were?

Yeah, we definitely missed that bit.

The analysis we’ve all waited for: Piers Morgan, Rosie O’Donnell weigh in on Ben Affleck’s comments

How does Ben Affleck’s Islam snit fit idiocy sum up your ‘Hollywood betters’? Like THIS 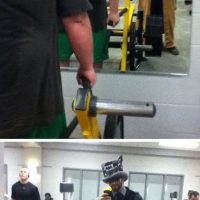