Heroic Truck Driver Pulls A Woman And Her Granddaughter From A Flaming Wreckage.

Truck driver David Fredericksen is being hailed a hero (and rightly so) after he saved the lives of a grandmother and her 1-year-old granddaughter after their car burst into flames during a crash on Interstate 10 outside Biloxi, Mississippi on August 11th (even though the date in the video says otherwise).

The whole thing, from the crash to his amazing rescue when he ran towards the fiery crash with a fire extinguisher, was all caught on a dashcam in his truck.

Everyone survived the crash, but the elderly driver did suffer a broken leg but was otherwise fine.

That man is an absolute HERO. As he becomes the first person to react and runs towards the crash, you can see how it encouraged all the other people around him to help too. He probably doesn’t feel like he did anything extraordinary, as heroes often don’t, but it takes a lot of courage to run towards a car that is engulfed in flames like that as it could explode at any moment.

It’s good to know there are everyday people like David Fredericksen out there.

Please share this amazing rescue video with your friends below. 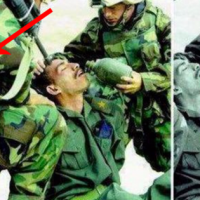