This Man Shot Himself In The Face. 17 Years Later, He’s Being Photographed For GQ.

Richard Norris isn’t the first person who’s undergone plastic surgery to model for a popular magazine, but he is the only one to grace the glossy pages after a full face transplant. Nearly two decades after a gun blast removed his nose to his chin, Norris posed for the camera of GQ photographer Dan Winters. The pictures were taken for the fascinating profile by Jeanne Marie Laska, which documents Norris’ full facial transplant story. Norris, who underwent the risky surgery in 2012, is only the 23rd person […]

Grayson Just Heard His Father’s Voice For The First Time Get The Tissues! 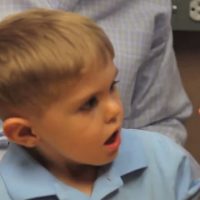 When the Clamp family learned that their son Grayson was born without normal hearing nerves in his ears, they knew the road ahead would be tough. They thought he’d never be able to hear. Because he is missing the nerve that cochlear implants stimulate, they were out of the question. He lived without hearing for three years. Then, his medical team came across an amazing breakthrough. First used for patients with deafness from auditory nerve tumors, the surgery implanted a device on his brain stem. Here is […]