What These Commuters Did Will Restore Your Faith In Humanity.

Everyone hates a train delay, just ask any New Yorker. When the speakers ding and the driver starts droning about “train traffic ahead,” the eyes start rolling and mumbles of annoyance begin to rise from the packed train cars.

But luckily, when this Australian man’s failed attempt to “mind the gap” while embarking on his commute Wednesday morning ended with his leg trapped between the 90-tonne train and concrete platform, it was his fellow commuters who came to his rescue.

Dozens of passengers exited the train, joined together and pushed on the car to create just enough space for the man to regain freedom. Take a look at this video of their heroic action.

The man was immediately taken to a waiting ambulance, but thankfully he sustained no serious injuries. A spokesman for Transperth, David Hynes, attributed the rescue to “the power of people.” This definitely proves how much we can accomplish if we all work together.

Share the inspiring story with your friends using the buttons below! 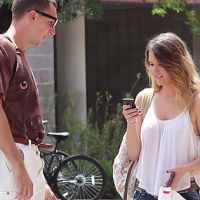